Joan Laporta returned to Barcelona for a second spell after being elected President in March 2021. He previously served between 2003 & 2010 and is the most successful Barcelona president with regard to trophies won per year. He immediately started rebuilding the club that had lost its way financially and on the pitch. The Catalans had to release Lionel Messi due to financial constraints, but a deal with Spotify has eased concerns. Laporta has shown his desire to get Barcelona back on top by hiring Xavi, who has got a tune out of his current crop of players following some shrewd January acquisitions. His focus is now balancing the books and maintaining the club status in Europe.

The summer transfer market would be thrilling as several huge names will be available for transfers. The spotlight would undoubtedly be on two generational talents in Kylian Mbappe and Erling Haaland. They are likely to switch clubs this summer, and Barcelona are at the forefront of these deals.

Kylian Mbappe will leave Paris Saint Germain when his contract expires this summer. The Frenchman has his heart set on a dream move to Real Madrid, who saw an enormous 200 million euros bid rejected in January. PSG will rue their decision as the man they paid 180 million euros for in the summer of 2017 is set to leave for free. Erling Haaland also looks set to leave Borussia Dortmund this summer. The Norwegian gem has a 67 million pounds release clause in his contract that becomes active at the end of the season. The Blaugranas are looking at both players, and rumor has it they could sign at least one of them.

Joan Laporta has, however, publicly debunked those rumors. He said the club is incapable of affording either of the players this summer as economic conditions would not allow it. “If I had to choose, I would choose whichever made it clear they wanted to come to Barca, if they don’t feel like it, it will be difficult. The economic conditions that I’ve been told these two deals would cost we’d never accept to spend those figures, no way. I see both of them really far from Barca” Laporta told RAC1.

If Barcelona cannot get their hands on either of the darlings of the summer market, then the in-form Pierre Emerick Aubameyang would have to. At least for now. Real Madrid have set their sight on Kylian Mbappe. Reports are suggesting they may have already agreed upon a deal. Manchester City have emerged as the favorite for Erling Haaland’s signature. Pep Guardiola wants to get his hands on the 21-year-old to fill his vacant number nine spot. Laporta has confirmed that Barcelona has completed two signings for next season. One is a midfielder, the other a defender. Although Laporta refuses to name them, Andreas Christensen and Frank Kessie have already signed their deals. 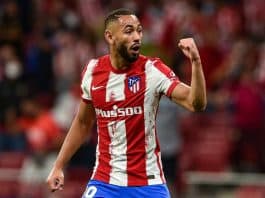