Belgium is the number 1 ranked footballing nation on the FIFA rankings and they boast a healthy amount of world-class players. Coach Roberto Martinez has been criticized widely as inept with most people believing that he does not have the pedigree or standing to lead this golden Belgian generation to a title. Eden Hazard and Kevin De Bruyne’s fitness was the hot topic before the game but while KDB recovered in time for the game, Eden Hazard did not.

The Italians were billed as underdogs but they are big dogs at Euro 2020. They won their three group games and managed to dispatch a stubborn Austria in the round-of-16. Now they had to face their biggest test at Euro 2020. Belgium, a team led by the MVP of the Italian domestic league Serie A. But Roberto Mancini has drilled this Italian side well, they fear no one. Giorgio Chiellini for Francesco Acerbi and Federico Chiesa in for Domenico Berardi were the only changes to the starting xi from the Austria game.

Italy dominated possession and looked to create dangerous openings while Belgium replied with dangerous transitions of their own.
Jeremy Doku was causing Giovanni Di Lorenzo all sorts of problems down the side with Lukaku and De Bruyne rampant also, Leonardo Bonucci had a goal ruled out for offside and then Leandro Spinazzola had a deflected effort that caused Thibaut Courtois some problems.

De Bruyne forced a magnificent save from Gianluigi Donnarumma. The first goal did not come until after about half an hour. Jan Vertonghen made a  mistake bringing the ball out from the defense under pressure and Marco Verratti stole it and set up Nicolo Barella who slalomed through and fired home. Belgium 0-1 Italy.

Italy’s midfield was having a ball with the ball with Belgium sitting deep and engaging a weak counter-press. Jorginho completed all his passes in the first half. Italy doubled their lead minutes later. On 42, Lorenzo Insigne picked the ball in his half, danced through a timid Youri Tielemans challenge before curling a stunner home. Belgium 0-2 Italy.

Jeremy Doku had been tearing Di Lorenzo a new one all night and the Italian full-back conceded a soft penalty on the Rennes attacker. Romelu Lukaku converted to give Belgium before half-time, Belgium to give Belgium a lifeline.

Belgium created their best chance on 61. The ball came to Lukaku who really should have scored but Leandro Spinazzola recovered to block the effort. 5 minutes later, Spinazzola couldn’t quite finish a great chance. Nacer Chadli came on for Thomas Meunier and his first impact was a dangerous cross that flew behind Lukaku and Thorgan Hazard couldn’t get it in with a spectacular effort.
A handful of changes were made. Dries Mertens had already replaced Youri Tielemans but then Nacer Chadli had to leave after pulling something while delivering that cross. He had to be replaced by Denis Praet.
Italian changes followed. Bryan Cristante came on for Marco Verratti. Ciro Immobile had a dreadful game and was replaced by Andrea Belotti, Domenico Berardi came on for the fantastic Insigne.

Spinazzola suffered an injury after chasing his own headed ball. He had to leave on a stretcher. The AS Roma full-back has been one of the best players at Euro 2020. It was a shame to see him pick up this injury.

Italy held on to see out their victory to secure a match against Spain at Wembley on Tuesday. It was a memorable performance from the Azzurri.
The Belgians crash out of Euro 2020 despite some promise. Their golden generation will have to wait till Qatar 2022 to see if they can pick up some silverware with all their talent. 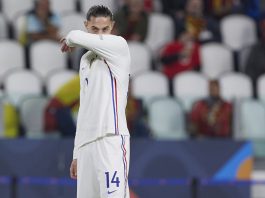 England 2-1 Denmark: Sweet Caroline, It Might Be Coming Home