Real Madrid completed another miraculous comeback to reach the UEFA Champions League final, as a 3-1 win on the night secured a 6-5 aggregate victory. Comebacks have been a real highlight for Los Blancos this campaign, and they stepped up again when it really mattered. Riyad Mahrez rifled City into the lead in the 73rd minute, and for much of the rest of the game, they looked to have secured a place in the final. Rodrygo had other plans. The Brazilian struck twice in two minutes late in the game before Karim Benzema’s penalty in the first half of extra time capped off an incredible night at the Santiago Bernabeu.

After a seven-goal thriller in the first leg at the Etihad Stadium, both teams employed a more cautious approach to the second leg. It led to a much more cagey affair in Madrid. Los Blancos had previously never overturned a first-leg deficit to reach the final in the competition’s history, but a raucous crowd was behind them after being crowned Spanish champions over the weekend.

Pep Guardiola’s men were on top and started to trouble Thibaut Courtois in the Real goal. City’s trademark high press won them the ball in the final third. A glorious pass from Kevin De Bruyne gave Bernardo Silva a huge chance, but he was denied by the Belgian goalkeeper at the near post. Madrid offered very little going forward and looked to pick City apart on the counter using Vinicius Junior’s blistering pace, but Kyle Walker did his best to keep the Brazilian quiet. The first half could not come any sooner to rescue Carlo Ancellotti’s men, who were under siege. Madrid had seven shots at goal but failed to register a shot on target in the first half.

A flurry after the restart failed to bear any fruit before a devastating City counter broke the deadlock. Substitutes Oleksandr Zinchenko and Ilkay Gündogan played an instrumental role in the visitors’ goal. An incisive move built from the back allowed Silva space in the middle of the park, the Portugal international slotted in Riyad Mahrez to fire in at the near post.

Real summoned the courage of a thousand warriors and thirteen champions league experiences to rally for an equalizer. Much like Luis Diaz’s influence for Liverpool in the second half against Villarreal, Ancelloti had an ace up his sleeve too. In-form wonderkid Rodrygo replacing Toni Kroos in the 68th minute, and it proved to be a masterstroke. They had to wait until the 90th minute for an attempt on target, but it was worth the wait.

A couple of costly near-misses from substitute Jack Grealish threatened to haunt City after Karim Benzema steered a cross into the path of super-sub Rodrygo for a tap-in. Moments later, Guardiola’s nightmare came true. Dani Carvajal’s cross found Rodrygo again, who directed his header beyond Ederson, sending the tie to extra time.

Rodrygo- Man of the moment

The inspirational Rodrygo picked up exactly where he left off. He picked out Benzema in the box, and the Frenchman was tripped by Rúben Dias inside the area. Having dispatched a Panenka from 12 yards in the first leg, he took no such risks this time, slotting his penalty into the bottom corner to send Real to the final.

Benzema’s spot-kick was his 10th goal in the knockout stages. He is now tied with Cristiano Ronaldo for most UCL goals in the knockout rounds in what was another Champions League classic. Yet another sensational comeback means Mohammed Salah will get his wish when the 13-time European champions face Liverpool in Paris, in what will be a rematch of the 2018 final. 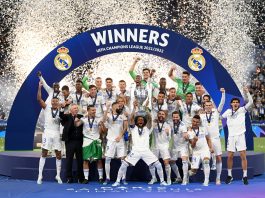 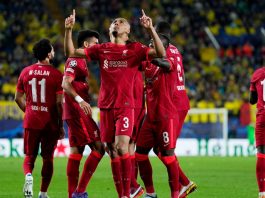 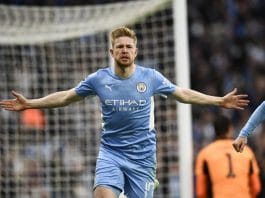