A win over closest rivals Borussia Dortmund would give Julian Nagelsmann’s troubled Bayern Munich side the Bundesliga title their 10th consecutive Bundesliga title since Jurgen Klopp’s double. The Allianz Arena was buzzing as Der Rekoirdmeister looked to get the job done as they mostly always do. Nagelsmann has faced criticism in his first year at the club, especially for his system that seems to put almost everyone in the attacking setup in positions they are not comfortable playing. Bayern has long established themselves as a 4-2-3-1 team, and this 3-4-3 is not gelling with the squad. Their UEFA Champions League quarter-final exit against Villarreal did not help. However, another title could help lift the mood, especially one that could be sealed against their bitter rivals.

Over at Borussia Dortmund, injuries and a defensive crisis have not allowed the club to mount a title challenge. There’s always something with them. They exited both the UEFA Champions League and Europa league due to their horrific defensive performances under Marco Rose. They have gone to sign Niklas Sule from Bayern Munich, and they want Nico Schlotterbeck from Freiburg to make things better, but we’ll see. Marco Rose was without Gregor Kobel, Thorgan Hazard, Mats Hummels, Gio Reyna , and Donyell Malen.

How First Half went

Bayern Munich took the upper hand immediately and scored the first goal of the game in the 14th minute. A deliciously hung corner from Joshua Kimmich came out to Serge Gnabry via Leon Goretzka. The German international walloped the volley beyond Marwin Hitz to give Bayern Munich the lead. Moments later, Gnabry thought he had scored his second after putting the ball in the back of the net, but it was ruled out for offside. Robert Lewandowski had slipped in Kingsley Coman, who was offside, and the Frenchman found Gnabry on the right. 1-0 it remained.

Dortmund began to look dangerous in attack. Manchester City-bound Erling Haaland was causing a few worries with his movement and directness. Julian Brandt slipped him in, but he skewed his shot wide on 29. BVB did not have a shot on target. “Humanity has moved beyond the need for BVB.,” one fan said.

Dan-Axel Zagadou has failed to mature since joining BVB. That immaturity was on show in another Der Klassiker as a hasty and errant clearance turned into a swift Bayern transition. Thomas Muller slipped in his partner-in-crime, and Lewy applied the calm left-footed finish to double the lead in the 34th minute. 2-0. The game was almost over at half-time. Sigh. Robert Lewandowski has scored in his last eight Bundesliga home games against his former club.

To the Second Half

After a tentative opening where Dortmund failed to put a shot on target, Kimmich decided to make things competitive. He went into a needless, hot-headed challenge on Marco Reus and gave away a penalty. Emre Can stepped up and buried it. 2-1. Lifeline for Dortmund.

BVB now had the initiative and came out attacking. It took a fantastic sliding challenge from Lucas Hernandez to prevent Marco Reus from netting the equalizer after great hold/linkup play from Haaland. Benjamin Pavard also had to make a risky challenge on Jude Bellingham that could easily have been a penalty to prevent a goal. Hitz had to produce a spectacular save to keep the Bavarians out and his team in the game. Muller’s shot fell to Lewy, but the keeper denied him from five yards. Gnabry was replaced by Jamal Musiala and walked straight down the tunnel. That one looked like an injury. Jamie Bynoe-Gittens replaced the anonymous Reinier Jesus, and ten minutes later, he slipped in Haaland whose deflected shot was saved by Manuel Neuer. Haaland found space again, and Upamecano put him off as he skied over on the volley.

Leroy Sane replaced Coman while Marcel Sabitzer replaced Muller. Then came the goal that sealed the title. It came from Musiala. The 19-year-old German international danced into the box before firing. Hitz saved before some comical defending from the Schwarz Gelben allowed him to tap it in. 3-1. Bayern sealed their title, and Dortmund disappointed again. What’s new? 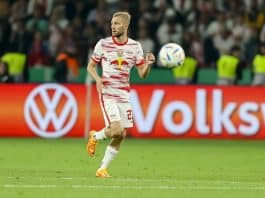 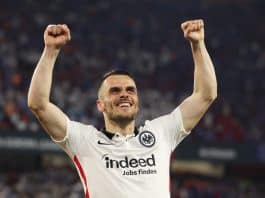