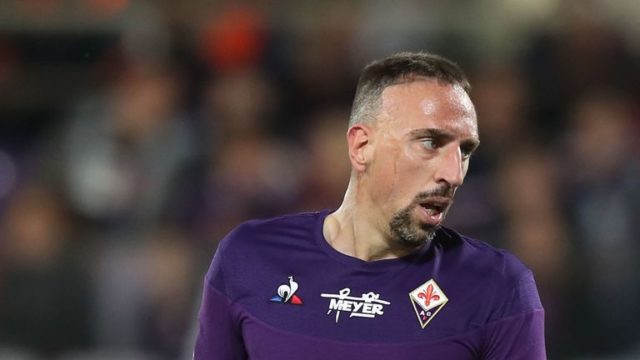 French man Franck Ribery has been handed a three-game ban and €20,000 for pushing assistant referee Matteo Passeri in Florentine’s 2-1 defeat to Lazio in Serie A on Sunday.

Ribery who apologized after an incident with a match official was caught on camera venting his anger after the final whistle, as he shoved match official Passeri on two occasions, before being ushered back to the dressing room by Fiorentina staff.

In addition to a €20,000 fine, the French winger will be out of action in Serie A until November 24 for “gravely disrespectful behaviour” towards the linesman.

“At the end of game, Ribery approached the assistant referee in a threatening way and was gravely disrespectful behaviour,” the Italian FA said a statement on Monday.

“In addition to disrespectful comments, he pushed with an arm on his chest… as well as in a further thrust grabbing him by the arm.”

Ribery had also issued a public apology via his official Twitter account, which reads: “I’m really sorry for last night.

“I apologise to my team-mates, the coach and the fans. I also apologise to Mr Passeri because at the end of the match I was very agitated and sad, and I hope he can understand my mood.

“I always want to stay on the pitch and help my team-mates because I came all the way to Florence for this city and this club, and I think Fiorentina should get more attention, the same attention given to the other clubs, for the great work we’re doing every day.”

Joaquin Correa had opened the scoring for the visitors in the first half at Artemio Franchi Stadium, before Ribery provided the assist for Frederico Chiesa to level the scoreline just before the half-hour mark.

The game look destined to end in a draw until Ciro Immobile netted in the 89th minute, but Fiorentina players were left incensed after an apparent foul by Jordan Lukaku on Riccardo Sottil in the build-up went unpunished.

The 36-year-old, who has contributed two goals and two assists in nine Serie A appearances for Fiorentina this season, joined the club on a free transfer this summer after leaving Bayern Munich at the end of last season.