Home Premier League ‘He is in the Squad’, Emery Says as He Speaks on Fielding... 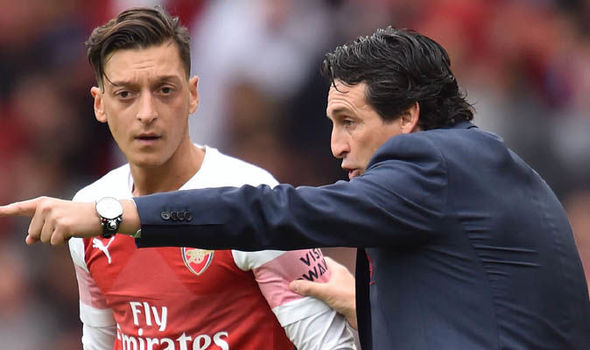 Out of Favour arsenal’s Midfielder Mesut Ozil might me back in action as arsenal’s head coach says the German is in his squad for the weekend.

The 31-year-old  had only played his  third game of the season in the club EFL cup loss to Liverpool, but words from Emery indicates  that he may return the fold again soon

Mesut Ozil’s brilliant performance in the Carabao Cup  may have paved the way for a much-need Premier League recall, suggests manager Unai Emery.

The 31-year-old featured for only the third time this team as the Gunners were edged out on penalties at Anfield, but left a keen impression before his substitution just beyond the hour mark.

Speaking ahead of Saturday’s key top-flight encounter with Wolverhampton Wanderers, however, Emery has indicated that the attacking midfielder may feature as he is in the squad for Saturdays game.

In particular, the Spaniard alluded to a greater attitude from Ozil in training as key to his prospective return to the fold once again, having last played in the Premier League in September’s draw with Watford.

”c and I think he has the possibility to play,” Emery said.

”I spoke with him on Tuesday. I said to him every time what is my plan with him. When he’s available, when he’s training well, when he’s consistent, when he’s positive he can help us a lot.

”Now I am seeing him positive and consistent. On Wednesday with his performance in Liverpool, I think this is the way we want. Also I am helping him, supporting him, demanding of him. This is the Mesut I think everybody wants.

“He has big experience. When you talk about players who are ready to play under high pressure, one is Mesut Ozil.

“I think he has confidence and I think he has respect. When he is in that positive way, when he is available consistently, he has the respect from us and from every supporter.”

Emery remains under fire from supporters for failing to deliver results this season in emphatic fashion, despite the club sitting fifth in the table.